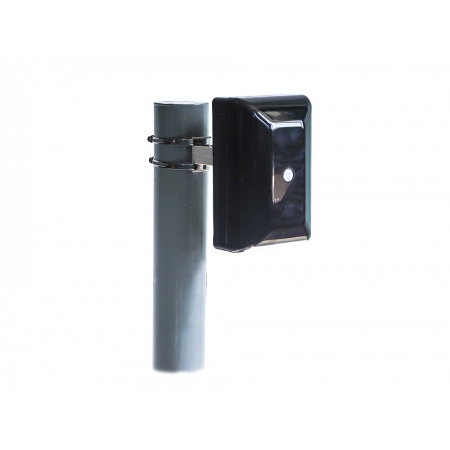 The dual technology bistatic sensor MIR-B100 is intended for the protection of different sites, non-heated facilities and for detecting an intruder crossing the detection zone.

The sensors are used for the protection of long perimeter sectors with high requirements for the mean time for false alarm, i.e. high immunity for industry, natural and common interference. There are two modifications of Dual Technology sensors, Bistatic – MIR-B.

The principle of operation: we achieved the high interference immunity of the sensor thanks to the combination of two different physical principles of operation – bistatic (monostatic) microwave (MW) and active (passive) infrared (IR), i.e. two ways of intrusion detection.

Different interferences influence differently on the processing channels. For example, the litter raised by the wind can activate the IR channel and the MW channel will stay inactive. That is why combination of these two physical principles and alarm initialization at the activation of both channels allowed to increase significantly the interference immunity.

There is no complete analogues of our sensors in architecture, design and integrated functionality.

As the alarm is generated only at the activation of both channels, the resultant detection zone in case of bistatic dual technology sensors has small dimensions – the dimensions of the IR beam. Like this we can use the sensors for the protection of perimeter sectors requiring extra narrow detection zone.

The high survivability of the sensor is assured thanks to the performance of the sensor in case of failure or false alarming of one of the detection channels.

The principle of operation is based on the operation of two channels working on two different physical principles of detection: bistatic microwave and bistatic infrared.

The sensors performance is the most effective on direct perimeter sectors requiring extra narrow detection zone, for example, if the sensors are installed by the top of the fence, in corridors, in areas near side-walks and roads, etc.

The essential advantage of the sensors is the high interference immunity.

The sensors have USB and RS-485 interfaces for work with special software. The software make it easy to start up the sensors and assures correct configuration of parameters.

In spite of apparent difficulty of the sensors, they are easy to operate. They do not require special knowledge of staff and are not expensive.