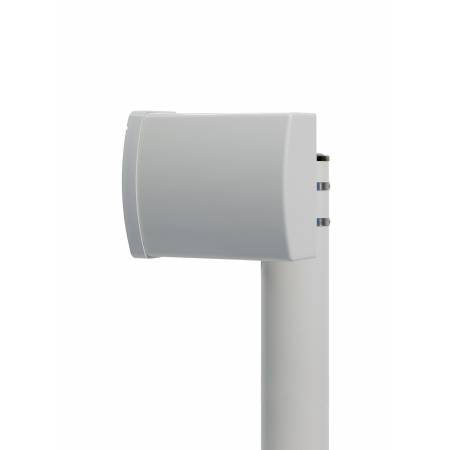 The microwave linear sensors modifications FORTEZA-М200 are intended for the protection of different sites and for generating a protective boundary of buildings and constructions (inside and outside).

The sensors are used for the protection of rectilinear perimeter sites like industrial plants, airports, security sites, electrical power stations, private houses and so on.

The principle of operation I based on generation of an invisible volumetric detection zone between the transmitter and receiver. In case the intruder is crossing the detection zone, the receiver registers its alteration and generates the alarm.

Тaking into account many years of use of these sensors we can conclude that they have high detection probability, good interference immunity, easy in mounting and configuration and do not require significant expense on seasonal maintenance.
The sensors are immune to the affect of rain, snow, fog, lightning, icing, solar radiation, electric power lines (up to 500 kV), vegetation, small birds and animals.

A wide range of modifications in range, frequency and operation temperature allows to choose optimal variants for perimeter protection in different climatic conditions.

We use traditional dry relay contacts as well as RS-485 and USB interfaces to control the sensors and to transmit the alarm signal. So, the sensors are easy compatible with many modern integrated security systems and popular control panels.

The sensors totally digital signal processing uses the latest and most effective developments and algorithms.

The sensor is the continuation of the line «FORTEZA» and keeps the following values and specifications:
- dimensions and shape of the detection zone;
- operational frequency 24,15 GHz;
- configuration using the PC and Android devices;
- interfaces: USB, RS-485, Bluetooth;
- lightning protection of all circuits up to 900 V;
- immunity to climatic and noise affect.

- 8 frequency letters allowing to use the sensors indoors – in stocks or hangars;
- frequency letter is used by the software. You don’t need to power off the sensor to change the frequency letter;
- the transmitter and receiver have got TAMPER button. In case the cover is opened, the signal is transmitted by the separate TAMPER line, as well as via the interface;
- the control elements are located on the side face of the housing, thanks to this location the sensors are more immune to the affect of precipitations during configuration;
- new and more comfortable bracket for adjustment;
- the control elements are located under the cover of bayonet cap. The cover of bayonet cap can be turned and removed using the standard flat screw-driver significantly reducing the time for opening/closing the cap;
- in the receiver under the cap cover there is only the socket USB and the state indicator, the configuration is made using the software making the configuration process more visual and fast.